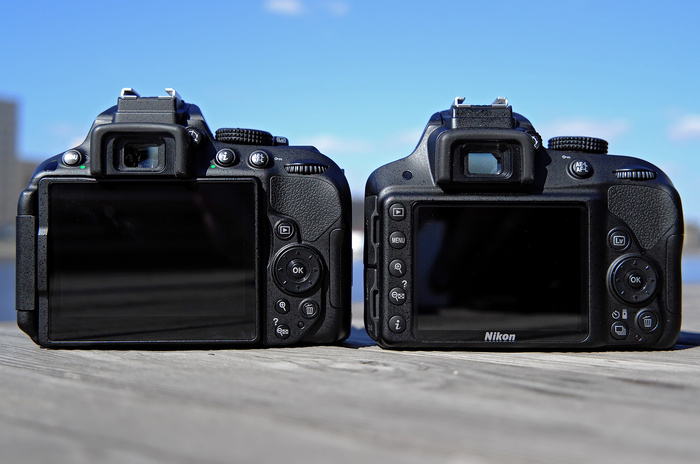 Getting to know the cameras

How many times our readers asked which camera they should choose from two similar in technical specifications - do not count. Therefore, we decided to start doing comparative tests of cameras. And the first in our test studio were representatives of the Nikon amateur DSLR line - the Nikon D5300 and D3300 models. What is the difference between them? Which SLR to buy as a first camera? Are differences in performance and price differences equivalent? We will try to answer all these questions in our test. By the way, we will only shoot with these cameras using whale lenses (it is in this configuration that amateur cameras are most often sold): Nikon AF-S 18-140mm F / 3.5-5.6G ED VR DX NIKKOR and Nikon AF-S 18- 55mm f / 3.5-5.6G VR II DX NIKKOR.

Well, let's start with the look. Externally, the cameras are so similar that only a specialist can distinguish them without looking at the silver nameplate with the model name. The cases of both cameras that came to our test are made of exactly the same black rough to the touch black plastic. However, on sale you can find other body colors for both the Nikon D3300 and the Nikon D5300.
Left - Nikon D5300, right - Nikon D3300
Ask for price Nikon D5300 / Nikon D3300 The dimensions of the D3300 are slightly more compact, but the difference in dimensions and weight can be noticed only with a very careful comparison of the two cameras - the D5300 is several millimeters larger and several grams heavier.
Top - Nikon D5300, bottom - Nikon D3300
The handles on the D5300 and D3300 are identical. If you close your eyes, you will never guess which camera you hold in your hand: the shutter button, the control wheel under the thumb - everything is in the same places. Even the shape of the rubber on the back is the same!
Left - Nikon D5300, right - Nikon D3300
The differences begin when the eye reaches the back of the cameras. The Nikon D5300 features a 3.2-inch swivel display with a resolution of 1.04 million dots. While the younger brother - Nikon D3300 - has a 3-inch screen with a lower resolution - 921,000 pixels. Which is more convenient, we will tell in the part of the test devoted directly to shooting. The difference in screen design led to differences in the layout of the buttons. If the D3300 has most of the buttons located on the rear panel to the left of the display, then in the Nikon D5300 these buttons are scattered literally throughout the case. But I repeat once again: despite some differences in location, the set of controls for both cameras is identical.

Shooting modes - novice photographers often pay attention to their number. Although in practice, not all modes are used. Moreover, professional photographers generally need four modes - P (program), A (aperture priority), S (shutter priority) and M (manual). But the Nikon D5300 and Nikon D3300 are designed specifically for beginner photographers, and therefore the company of the inseparable four PASMs are: auto mode, “shooting without flash”, “portrait”, “landscape”, “children”, “sports”, “macro shooting” and a set of effects which we will talk about a bit later. To this already big set, the D3300 adds the “night portrait” mode, and the D5300 has a whole set of story programs for every taste in the SCENE mode. To use them or not is up to you. But in my opinion, it’s much easier to figure out the camera settings once, than by trial and error to choose the appropriate mode for the shooting situation. After all, it’s not without reason that the majority of pros refuse plot programs ...
Choice of Modes, Nikon D3300
Choice of Modes, Nikon D5300
To understand the settings you will need instructions. But if you have a Nikon D3300, then you can do without it. This camera has a help mode (GUIDE). And this is not just a set of tips, it is an interactive guide to action! Choose “Shooting” - “Advanced Features”. Now choose the plot or effect that you want to implement in the picture. The camera itself will explain what settings you need to apply for this and help you set them using a clear graphical interface. With one shot you can kill two birds with one stone: to pick up the optimal settings for the plot, and understand what this or that setting is responsible for. By the way, if you select “Easy Operation” in the GUIDE mode, then you will find the same expanded set of scene programs that is implemented in the Nikon D5300 in SCENE mode.
Help Mode Interface
Help Mode Interface
Help Mode Interface
Help Mode Interface
Help Mode Interface
Help Mode Interface
In fact, the set of shooting modes for the Nikon D5300 and D3300 is identical. But the Nikon D3300 implements a very convenient help mode, which is not found in the more experienced photographers D5300. The free online JavaScript beutifier organizes your scripts. Use it every time before publishing codes.