FUJIFILM X-T3: week with an expert 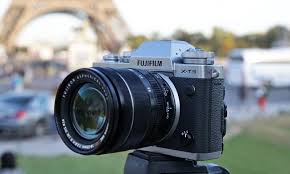 In September 2018, Fujifilm introduced a new camera of the top XT series - the X-T3 model . The previous flagship camera FUJIFILM X-T2 has held the lead in the line since mid-summer 2016. With minimal external changes of the “troika” compared to the “kopeck piece” inside, it has very serious improvements, thanks to which the X-T3 has largely surpassed not only its predecessor, but also the reporter model X-H1 that appeared in February 2018. Of particular note is the support in the X-T3 codec H.265 / HEVC, which allows you to record 10-bit video (4: 2: 0) on a memory card. . Get price FUJIFILM X-T3 Almost simultaneously with the X-T3, several full-frame mirrorless cameras entered the market at once. It is interesting to find out what place the FUJIFILM X-T3 with the APS-C matrix can now claim among the top mirrorless cameras and for what tasks it is best suited. We will try to answer these questions in the review.
X-T3 / XF16-55mmF2.8 R LM WR Settings: ISO 320, F8, 1/140 s, 36.0 mm equiv.Download RAW
Let's start the story with key characteristics. FUJIFILM X-T3 is equipped with an APS-C format matrix of the new generation X-Trans CMOS 4, which has a higher resolution of 26.1 megapixels (24-megapixel resolution in X-T2) and, most importantly, is made using BSI CMOS technology. We have not seen matrices with such characteristics before. Therefore, it is very interesting to know what it is capable of, because backlit matrices (BSI) collect more light, have a wider dynamic range and less noise at high ISOs.
X-T3 / XF16-55mmF2.8 R LM WR Settings: ISO 1250, F4, 1/30 s, 24.0 mm equiv.Download RAW
According to the manufacturer, the speed of reading data from the X-T3 matrix is ??1.5 times higher than that of the X-T2. The new four-core X-Processor 4 processor accelerated data processing by 3 times compared with the X-T2. Unfortunately, the X-T3 does not implement, as in X-H1, a stabilization system based on matrix shift. But the X-T3 is superior to this reporting camera in terms of burst speed, as well as an autofocus system and video capabilities. The X-T3 LCD screen, retaining the dimensions, resolution and degrees of mobility of the X-T2, became touch-sensitive, which greatly simplified camera control. Let's see how the characteristics of the three models of the mirrorless X family mentioned above look in comparison.

Looking at these characteristics, you can see that in X-T3 the progress compared to X-T2 is very great, while with X-H1 it has parity in electronic viewfinder, LCD screen and wireless interfaces. And there is one annoying loss due to the lack of a stabilization system built into the camera. However, such a system is absent in many flagship cameras, especially those that are seriously aimed at shooting video. And the X-T3 is just one of those. But at the same time, the FUJIFILM X-T3 surpasses both other models in the autofocus system, which uses up to 425 points, with phase sensors covering the entire field of the frame. The speed of serial shooting with the X-T3 is also higher: it reaches 30 frames per second when working with an electronic shutter and 11 frames per second with a mechanical shutter, and all this in continuous autofocus mode. Agree, a very serious argument, including in comparison with the full-frame news from the world of DSLRs.
X-T3 / XF16-55mmF2.8 R LM WR Settings: ISO 320, F8, 1/160 s, 33.0 mm equiv.Download RAW
But it's time to get to know the camera better, and also to learn its capabilities in real shooting.