How to take pictures at night: photographs of the starry sky 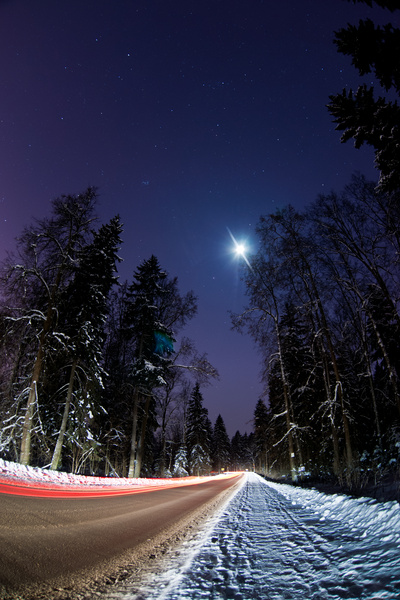 When I first saw photographs of night landscapes with the sky in which thousands of stars are visible, I immediately wanted to learn how to shoot the same way. He took the camera, went outside ... and, of course, nothing came of it the first time. I had to read a little, practice. But everything turned out to be much easier than I thought. In my article I will give some simple tips that will help the happy owners of DSLRs to understand the issue. I must say right away that the shooting of other galaxies and spectacular nebulae will not be described here: the technique of such surveys is too complicated.

What do you need?

We start, by the way, not with technology. For me it is not an end in itself to capture a piece of the night sky. This is for an astronomer, not a photographer. Stars for me are a spectacular way to decorate the landscape. And landscape photography always begins with a choice of place and time. Over time, everything is very simple: you need a cloudless night. Summer or winter outside - the difference is not so great. Of course, in frost, the matrix at slow shutter speeds heats up less, the photos have less noise. But the photographer freezes at the same time too quickly. As a result, I would not give priority to either summer or winter. The place should not only look spectacular, but also be as far away as possible from the towns and cities illuminated by lanterns. They give a flare in the sky, against which the stars are simply not visible. So it’s best to take such filming somewhere in a cottage in the suburbs, and ideally, to leave a hundred kilometers from civilization.
Cloudiness and light from the city may interfere with shooting
Lilac is absent in the sky - illumination from city lighting.
Now we come to the question of technology. Better if you have a DSLR. But mirrorless, you can achieve good results, you only have to face the problems of focusing in the dark. Optics most often need wide-angle. I often use 14mm and 16mm full-frame lenses. But the whale lens that comes with your amateur camera is also quite suitable. That's what you definitely can’t do without, it’s without a tripod. Exposures will be long and the camera must be securely locked. The trigger cable will not be superfluous. Although for the first time it will be possible to do without it. It is enough to use the shutter lag to let the camera vibrate from touching by the time the shutter opens. Do not forget to dress according to the weather, and also get a flashlight - the more powerful, the better.

Here, beginners have the most questions. Let's start with the simplest case - shooting a landscape on a cloudless moonlit night. We put the camera on a tripod, lower the ISO to 200 units (most often this is just enough). Try not to close the aperture too much, not stronger than f / 4-f / 5.6. And select the shutter speed manually in an experimental way, so that the brightness of the photo matches your creative idea. Caution: shutter speeds may be too long! If your camera cannot handle such a slow shutter speed in manual mode (in some models, shutter speed is limited to 30 seconds), carefully increase the ISO.

The next problem is focusing. It is automatically impossible to focus on a dark sky at night. And in the viewfinder, most likely, nothing is visible at all. We do this: we find distant lights on the horizon (they are almost always and everywhere) and try to manually focus on them. You can take a few control shots and, if necessary, correct focusing. If a foreground appears in the frame (and what kind of landscape is without a foreground?), Then it makes sense to focus on it, having previously lit it with a flashlight.

In a stream of endless deeds and everyday worries, we often forget about such simple things as the rotation of the earth. Stars in the sky never stand in one place. They are constantly moving relative to the earth. Although each rule has its own exceptions. The North Star nevertheless shifts the least during the day. And approximately we can say that it stands still. And all the rest - revolve around her. In short exposures this is not visible, but in long exposures it is perfectly noticeable! If you want to get point-stars in the picture, then try to shoot at relatively short shutter speeds. If you want dashes instead of dots, increase the shutter speed.
The picture was taken with a 15-minute exposure. It clearly shows the North Star in the center of rotation
Stars are constantly moving across the sky

“The rule of six hundred”

There is an empirical rule that allows you to determine the shutter speed at which the stars in the frame begin to turn from points to dashes due to the rotation of the earth. It is called the "six hundred rule." Divide the number 600 by the equivalent focal length of your lens, and you will get the corresponding shutter speed in seconds. For 16 mm fish eyes, for example, shutter speeds of up to 37 s can be used. And for a whale lens with a wide-angle position of 18 mm, it is better not to exceed the value of 20 s.

When it's completely dark

In some cases, we manage to get so far from civilization that the light of its cities is not visible at all in the sky. In this case, we have a chance to capture the spectacular milky way. Feel free to set the maximum allowable shutter speed, open the aperture a little wider and try to increase the ISO. Where the human eye saw just a dark sky, the camera sees much more!
Olympic construction in Sochi: there are no flares in the mountains, and you can capture more stars

You have not forgotten about the flashlight? You can highlight the details of the foreground with it. You can use color filters to achieve multi-colored illumination.
A passing car was a flashlight.