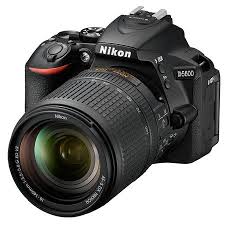 The current line of SLR cameras Nikon covers the entire spectrum of interests of customers. It has cameras with full-frame matrices (FX, frame size about 36 × 24 mm) and “cropped” - APS-C, that is, 1.5 times smaller diagonally compared to full-frame. The frame size is approximately 24 × 16 mm. In Nikon, they are called DX .. The Nikon DX-series of DSLRs today includes four models:
Nikon D3400
Nikon D5600
Nikon D7500
Nikon D500
Of these models, of course, the most sold are those related to the initial level - they are cheaper, they are easier to photograph for those who do not want to deeply study the technology of professional shooting. Such cameras not only know how to properly set the modes themselves, but also help the owner in mastering the basics of shooting using text prompts. The Nikon D5600 camera has a touch screen, and many moments of photography are very similar to those on a smartphone, so for beginners, shooting will be familiar and convenient. Those settings that may be incomprehensible are explained on-screen prompts. The first five-thousandth camera, the Nikon D5000, appeared in 2009. At first, the main differences between this series and the "three thousandth" were the type of matrix (CMOS instead of CCD) and a rotary screen. Later models began to be equipped not with 11-, but with 39-point autofocus, which was previously used only in mid-range cameras. Get the price of Nikon D5600 The resolution increased, the processors were updated ... Finally, the “five thousandth” features appeared, without which a modern camera can no longer be imagined. This video recording, wireless control and communication with mobile devices, a touch-sensitive rotary screen.
NIKON D5600 / Nikon AF-P DX 18-55mm f / 3.5-5.6G VR NIKKOR Settings: ISO 100, F5.6, 1 s, 60.0 mm equiv.
Let's see what Nikon D5600 offers from the familiar to the modern user : The Nikon D5600 lies comfortably in your hand even with heavy professional lenses - shooting with the AF-S NIKKOR 70-200mm f / 2.8G ED VR was comfortable despite the fact that the lens is three times more heavy than the camera (the camera itself with a battery and a card weighs 465 grams, and the lens - 1540). When working with the standard AF-P DX NIKKOR 18-55mm f / 3.5-5.6G VR and the new fast AF-S DX NIKKOR 16-80mm f / 2.8-4E ED VR, there was no imbalance. What can I say about the AF-S NIKKOR 50mm f / 1.8G absolutely lightweight fix. The camera confidently lay in the hand when shooting with an external Nikon Speedlight SB-700 flash.
NIKON D5600 / Nikon AF-S Nikkor 50mm f / 1.8G Settings: ISO 100, F2.8, 1/200 s, 75.0 mm equiv.
The Nikon camera’s standard rubber grip, comfortable buttons and control wheels, a fairly bright viewfinder, better external flash control than previous cameras of the same class allow the Nikon D5600 to come close to mid-range models in terms of convenience and performance, giving the photographer the opportunity to get the desired result.