The best smartphones of 2016: flagships of the first half of the year 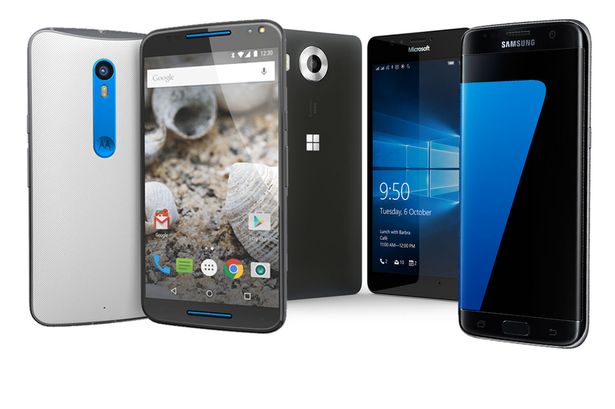 We can say with confidence that we have already seen most of the flagships of 2016. One way or another, all market participants showed their vision of the top-end smartphone this year, so we decided to put all the “heroes of our time” into one list. It can be supplemented with literally several devices, the announcement of which is planned for this fall. It's easy to guess their names: Samsung Galaxy Note 6, Apple iPhone 7 and 7 Plus, smartphone and Nexus phablet.

Get the price of OnePlus 2 The Chinese company OnePlus has seriously hit the smartphone market, showing that the flagship may be affordable. Today, the new OnePlus 2 can be purchased for about 25 thousand rubles. At the same time, you get the top Qualcomm Snapdragon 810 processor, 4 GB of RAM and 64 GB of internal memory. The smartphone has a high-quality 5.5-inch display with Full HD resolution. You can also note the 3300 mAh battery, which allows the device to work during the day. The main camera with a 13 megapixel sensor shoots very well, and a 5 megapixel front camera is perfect for self-portraits. We also note a good appearance, small frames around the screen and a back made of rough plastic. By a good tradition, the site can buy a back cover made of wood or even stone.

Get price Xiaomi Mi5 Another flagship that can be called affordable. The manufacturer is Xiaomi, the thunderstorm of all large companies. It’s easier to say what they don’t do. There are batteries, fitness bracelets, smartphones, tablets, a rice cooker from Xiaomi on the market. Rumors are also stubbornly about a laptop of their production. The announcement of Xiaomi mi5 took place at a global exhibition. The device was introduced simultaneously in China and Spain (Barcelona). Xiaomi mi5 is a very beautiful flagship with curved glass at the back, like the Samsung Galaxy Note 5. It is not on official sale in Russia, but it is quite possible to find a device for 25,990 rubles. Available top-end hardware: a quad-core Qualcomm Snapdragon processor 820, 3 or 4 GB of RAM and 32, 64 or 128 GB of internal memory. There is no microSD card slot, but there is support for two SIM-cards. The device is equipped with a 5.2-inch display with Full HD resolution. We also note a non-removable 4000 mAh battery. The rear camera unit has a 16 megapixel sensor, the lens aperture is f / 2.0. Also implemented phase autofocus, optical image stabilization and two-color flash. The front camera is equipped with a 4 megapixel sensor.

Get the price of Apple iPhone SE Of course, we are waiting for the autumn presentation of Apple products, which will show the world the iPhone 7 in a new design. His concepts are already coming out of the pen of designers around the world. However, the iPhone SE can also be considered the flagship of 2016. From the point of view of appearance, this is the iPhone 5 / 5S familiar to everyone, the aluminum casing of which is almost 3.5 years old. Inside is the hardware from the iPhone 6S, packed in a smaller “box”: the top-end A9 processor, 2 GB of RAM and 64 GB of internal memory (we are considering a version with a large amount of memory, because 16 GB in the modern world is extremely small). The iPhone SE has a four-inch display with a resolution of 1136 by 640 pixels. In comparison with the presented Android-backgrounds, the battery capacity is half as much - only 1624 mAh. The main camera also moved from the iPhone 6S. This is a 12-megapixel sensor with a f / 2.2 aperture lens, phase detection autofocus and two-color flash. Front camera resolution of only 1.2 megapixels.

Learn price ASUS ZenFone Zoom ZX551ML Asus Zenfone Zoom is the only real camera phone on this list that appeared on the Russian market in 2016. It is distinguished by a large and noticeable camera unit, under which a whole system of Hoya optical elements is hidden, providing a triple zoom. The device has a very decent camera with a resolution of 13 megapixels with laser autofocus, optical image stabilization and a two-color flash. The front camera is equipped with a 5 megapixel sensor. Asus Zenfone Zoom is an Intel Inside smartphone. Inside there is a quad-core Intel Atom Z3580 processor, 4 GB of RAM and 128 GB of internal memory. It would seem, what else can you dream of? But there are slots for two SIM-cards and a slot for microSD. The battery capacity is only 3000 mAh, but the device survives until the evening on a single charge.

Price Motorola Moto X Force The flagship, which is paving the way for the Moto brand to return to the Russian market after a five-year absence. Interestingly, the entire Moto X lineup, which consists of three smartphones (Play, Style and Force), has the same main camera unit. Here are installed sensors with a resolution of 21 megapixels, a two-color CCT flash and phase detection autofocus. The front camera is 5 megapixels, and only at Play it is not equipped with a flash. The rest is a device with advanced capabilities: an eight-core Qualcomm Snapdragon 810 processor, 3 GB of RAM and 32 GB of internal memory. It is possible to expand using microSD. It is important to note the large battery capacity (3760 mAh), thanks to which the smartphone works all day with an active load. Another interesting feature is Moto ShatterShield's unbreakable screen. It has a 5.4-inch POLED display and Quad HD resolution. Unfortunately, if you look at the screen directly, it “rolls” a little in a greenish tint, but this is a kind of payment for the fact that it will survive more than one fall.

Get the price of Samsung Galaxy S7 Edge This year, the Samsung Galaxy S7 edge again received the title of one of the best mobile cameras on the market. The Korean company has reduced the number of pixels in favor of their quality. Now here stands a 12 megapixel sensor. It is equipped with a phase focus and LED flash. Inside the eight-core Exynos 8890 processor, 4 GB of RAM and 32 GB of internal. The latter can be expanded using microSD: the device has a universal slot for a memory card or a second SIM card. Note a slightly smaller display compared to the previous generation - 5.5 inches with Quad HD resolution. The screen is again bent at the edges, which gives the image volume. The battery capacity has increased by 20% (3600 mAh), and it lasts for a day of active use.

Learn the price of Huawei P9 The most interesting and high-profile novelty of the year, the most unexpected and amazing collaboration. The Huawei P9 is a smartphone with a Leica hand in its camera. Here, the Sunny Optical Technology sensor is installed - a certified manufacturer of cameras for a German company. Also, smartphones use Leica SUMMARIT optics. But most importantly, there is not one, but two rear cameras at once: color and black and white. Both sensors have a resolution of 12 megapixels and optics with an aperture of f / 2.2. Available phase autofocus and two-color flash. An 8 megapixel front camera is perfect for self-portraits. Inside, solid power: HiSilicon Kirin 955 processor, 3 GB of RAM and 32 GB of internal memory. There is a universal slot where you can insert a microSD or a second SIM card. The smartphone has a 5.2-inch display with Full HD resolution. Non-removable battery with a capacity of 3000 mAh is responsible for autonomy.

The Taiwanese company has been using the relatively successful design of the One line for the next year: wide polished chamfers became the main change this year. But the main surprise is the camera of the device, which was highly praised by our colleagues from DxOmark, putting HTC 10 on the same level with the Samsung Galaxy S7 edge. The camera has a 12 megapixel sensor with UltraPixel technology (this technology is also implemented in the 4 megapixel front camera). Inside the HTC 10 flagship capacities: a quad-core Qualcomm Snapdragon 820 processor, 4 GB of RAM, 32 or 64 GB of internal memory. There should be no problems with the place: the device has a dedicated microSD-slot. The smartphone has a 5.2-inch display with Quad HD resolution. Note a non-removable 3000 mAh battery.

Check the price of LG G5 This flagship can be considered one of the most innovative on the market, as LG came up with a new form factor of the device: using special replaceable LG Friends modules, you can turn your smartphone into a Hi-Fi player or camera with a comfortable grip. The camera unit is also original: here, as in Huawei, there are two cameras, but the first has a viewing angle of 80 °, a resolution of 16 megapixels and f / 1.8, and the second is wide-angle (135 °) with a sensor of 8 megapixels and f / 2.2. The camera is equipped with laser autofocus, optical image stabilization and LED flash. An 8 megapixel front camera is perfect for taking selfies. Inside advanced power: Qualcomm Snapdragon 820, 4 GB of RAM and 32 GB of internal. It is possible to expand the latter using microSD. The device has a 5.3-inch display with Quad HD resolution. The battery is small - 2800 mAh. But it can be easily and quickly replaced by another, or take a special grip LG Cam Plus, which has an additional battery of 1200 mAh.

Learn the price of Sony Xperia X Performance Sony Xperia X Performance - the new flagship of the Japanese company, which was announced at the Mobile World Congress. Sony Mobile has seriously updated the device’s camera by installing a 23 megapixel sensor with an f / 2.0 aperture. An interesting innovation is the predictive hybrid autofocus system. The 13 megapixel front camera will no doubt be perceived as one of the best on the market. In terms of power, the Qualcomm Snapdragon 820 processor, 3 GB of RAM and 32 GB of internal memory are installed in the Xperia X Performance. There is a dedicated slot for microSD-cards. Another feature of the new Xperia X line: all smartphones in the series have a five-inch display. In this case, the device’s screen works in Full HD resolution. The battery is not very big - 2700 mAh. One can only hope for work to optimize energy consumption and the Stamina proprietary program.

Get Meizu Pro 6 Price Another interesting novelty is Meizu Pro 6 , which, most likely, will cost a little cheaper than the flagships, since it is developed and manufactured in China. The device has a main camera with a sensor with a resolution of 21 megapixels, the lens aperture is f / 2.2. Interestingly, Meizu Pro 6 uses dual autofocus (phase and laser), there is also a ring flash with ten LED diodes. As for capacities, on paper everything is just space cool, because Meizu Pro 6 is the first smartphone with a ten-core MediaTek Helio X25 processor. Inside 4 GB of RAM. Versions with 32 and 64 GB of internal memory will be available. The microSD slot in the device is not provided. It has a 5.2-inch screen with Full HD resolution. The battery capacity is 2560 mAh