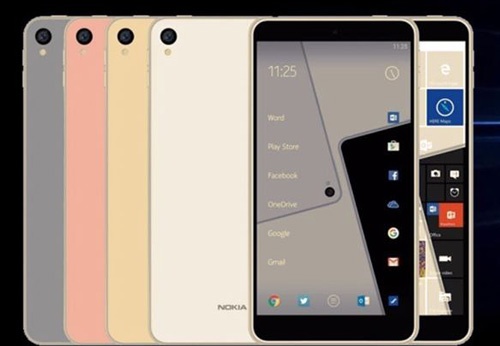 Once again, we gathered to discuss the best smartphones from different price categories. The first guide collected devices worth up to 5 thousand rubles, and now the price ceiling is at the level of 30 thousand. It all started with small screens, low-power dual-core processors and 1 GB of RAM. Now we are moving on to high-performance chipsets, several gigabytes of RAM and excellent cameras. Gadgets from this collection are equipped with Full HD-displays with a diagonal of 5-5.5 inches, 3 or 4 GB of RAM and cameras with a resolution of at least 12 megapixels.

Price: 25990 rubles. Buy ASUS Zenfone 3 ZE 552KL. Last year, ASUS introduced the Zenfone 3 smartphone, deservedly considered one of the most balanced gadgets in the mobile market. In terms of hardware, Zenfone 3 has everything in perfect order: a 5.5-inch screen with a resolution of 1080 by 1920 pixels, a powerful Qualcomm Snapdragon 625 chipset, 4 GB of RAM, 64 GB file storage with support for microSD-cards up to 128 GB , fast Wi-Fi 802.11ac and LTE-A wireless modules. Plus a good “front camera” of 8 megapixels and a main camera with a resolution of 16 megapixels, laser autofocus, optical stabilization and aperture F2. Given the appetizing price tag, I think it would not be out of place to recall our test of this device .

Price: 25990 rubles. Buy Xiaomi Mi5. This is one of the most successful smartphones in the first half of 2016 with an excellent value for money. Many waited for Mi5, and the company tried to meet these expectations as much as possible by placing the quad-core Snapdragon 820 processor, high-speed LTE-A Cat.12 and Wi-Fi 802.11ac modules, a fingerprint scanner, 3 GB operational and 32 GB in an ergonomic metal and glass case built-in memory, 3000 mAh battery. It has a 5.15-inch Full HD display, front and main cameras at 4 and 16 megapixels, respectively.

Price: 26990 rubles. Buy Alcatel Idol 4S 6070K. The main feature of this smartphone is a colorful display with a diagonal of 5.5 inches, a resolution of 2560 by 1440 pixels (Quad HD) and a highest pixel density of 534 ppi. Other characteristics of Alcatel Idol 4S are no worse: Qualcomm Snapdragon 652 octa-core processor, 3 GB of RAM, 32 GB storage with expandable microSD memory cards up to 512 GB. Note worthy cameras: 8-megapixel front and 16-megapixel main. Included is a headset from JBL and a virtual reality helmet! However, you can get acquainted with all the features of the smartphone in a review article .

Price: 27990/29990 rubles. Buy Honor 8. Honor 8 has a whole bunch of useful qualities, thanks to which the device was recognized as the best smartphone of 2016 (at least in terms of price and quality). The gadget has almost the top filling (juicy 5.2-inch Full HD-screen, HiSilicon Kirin 950 chipset, 4 GB of RAM, 64 GB storage and a full set of wireless interfaces). The dual 12MP main camera resembles the Huawei P9 and P9 Plus. It implements several cool flagship "chips". Examples of pictures are in our test . Separately, it is worth mentioning the version of Huawei Honor 8 Premium in the color "Pink Sakura." This modification appeared in 2017.

Price: 27990/29990 rubles. Buy Meizu Pro 6. Meizu Pro 6 is the flagship of the company, combining ergonomic design and uncompromising performance. On the front panel of a practical case made of metal and plastic (the use of such materials allows to achieve higher strength), the moderately compact 5.2-inch AMOLED display and a resolution of 1080 by 1920 pixels are located. The “heart” of Meizu Pro 6 is the ten-core Helio X25 processor, which has 4 GB of RAM and 32 or 64 GB of internal memory (the latter, unfortunately, cannot be expanded). The main advantages include the main camera: a 21-megapixel photo module takes impressive pictures and 4K video. Read more about the photo capabilities of the gadget in the Prophotos.ru test .

Price: 27990 rubles. Buy Moto Z Play. The LG G5 curtsy towards the concept of modular smartphones did not work out well, but Lenovo, a smartphone manufacturer with the Moto brand, decided to conduct its experiment on introducing modular devices to the market. The assortment of modules is still modest, but for the sake of fairness it should be noted that among them there were quite interesting additions: for example, the “adult” photo module from Hasselblad and a powerful additional speaker from JBL. However, recently at the MWC 2017, Lenovo representatives promised to release more than 10 new modules this year. At the same time, the Moto Z Play is remarkable not only for its original engineering solutions, but also for a very competitive filling: an eight-core Snapdragon 625 processor, a 5.5-inch display with a resolution of 1080 by 1920 pixels, 3 GB of RAM and a 32 GB drive, as well as a slot for memory cards up to 2 TB. The front 5-megapixel camera does not stand out, but the main 16-megapixel photo module with laser autofocus and aperture F2 copes well even with dynamic scenes.

Price: 27990 rubles. Buy Samsung Galaxy A5 (2017). Speaking about Samsung, we mean bright appearance and the highest quality of performance. Galaxy A5 (2017) - the latest model, the middle link of the A-series. The case is made of metal and glass, a 5.2-inch display is installed here. Worthy features: an eight-core processor with a frequency of 1900 MHz, a non-removable battery of 3000 mAh, 3 GB of RAM and 32 GB of internal memory. Samsung Galaxy A5 won the title of one of the best devices for mobile shooting in the middle price segment (front and main cameras have a resolution of 16 megapixels). We were convinced of this by testing the Samsung Galaxy A7 (2017) , in which the same camera unit is installed.

Price: 29990 rubles. Buy Apple iPhone 6. Despite its almost three years of age, this model of the "apple" smartphone can still be considered relevant. At the production stage, Apple lays great potential in its gadgets, so the iPhone 6 supports the current version of iOS 10. An inexperienced user, looking at the technical specifications of the model, will certainly criticize it. A dual-core processor, 1 GB of RAM and 16 GB of internal memory (versions with more memory are more expensive), the main camera of 8 megapixels and a display with a non-standard resolution of 750 by 1134 pixels in 2017 seem somewhat archaic, but using the device literally two minutes, you will understand that the iPhone 6 will be relevant for at least a couple of years.

Price: 29990 rubles. Buy ASUS Zenfone 3 Zoom ZE553KL. This is the new third-generation ASUS Zenfone smartphone that continues the tradition of the Zenfone Zoom ZX551ML camera phone. The latter can still be found on sale, while it costs more than new items. But the difference between the devices is palpable. ASUS Zenfone 3 Zoom received a dual camera with sensors with a resolution of 12 megapixels. One lens can be considered the main one: wide-angle, with a focal length of 25 mm (equiv.), Aperture F1.7 and optical image stabilization. The size of the sensor is 1 / 2.55 ?. The second lens has a focal length of 59 mm (equiv.) And aperture F2.8, providing a 2.3x optical zoom. Hybrid autofocus (laser and phase) and a two-color LED flash are also installed in the camera unit. The front camera also did not disappoint: 13 megapixels, 1/3 ? sensor size, F2.0 aperture ratio. Other characteristics: Qualcomm Snapdragon 625 octa-core processor with a frequency of 2 GHz, 4 GB of RAM and 64 GB of internal memory (+ microSD). Note a large 5.5-inch display with Full HD resolution, a 5000 mAh battery.

Price: 29990 rubles. Buy Huawei Nexus 6P. Huawei is evolving before our eyes. In 2015, Google chose this manufacturer as a partner for the release of the latest smartphone under the Nexus brand. As it turned out, the experts from the Corporation did not fail: Huawei Nexus 6P has become one of the best gadgets in the line. The smartphone has a large 5.7-inch screen with Quad HD-resolution, a fast Qualcomm Snapdragon 810 processor, 3 GB of RAM, 64 GB of internal memory, a fairly large battery with a capacity of 3450 mAh, excellent cameras: 8-megapixel front and 12 -Mp main. But the main advantage of the Nexus 6P is that it runs on pure Android 7.0 “out of the box” and will continue to be one of the first to get the latest OS versions. And since Google Pixel and Pixel XL are not officially sold in Russia, Nexus 6P becomes the only (and ideal) candidate for the role of a gadget with stock Android Nougat.

Price: 29990 rubles. Buy Le Max 2. LeEco, which loudly announced itself last year, introduced a number of devices with impressive features and an affordable price tag. One of them is the Le Max 2 smartphone, which is distinguished by flagship equipment at an adequate cost. By the way, you can wait for some promotion and buy a device at a discount. “Under the hood” are as much as 6 GB of RAM, a powerful Snapdragon 820 processor with a frequency of 2.15 GHz, a 64 GB drive, GPS / GLONASS / BeiDou navigation modules and a non-removable battery with a capacity of 3100 mAh. Here's a 5.7-inch Quad HD display. The gadget can shoot videos in 4K resolution on a 21-megapixel main camera and take cool selfies on an 8-megapixel front camera. Read more about the device here .

Price: 29990 rubles. Buy LG G5 SE H845. The original selling “chip” LG G5 SE (like the original G5) was supposed to be a modular design, but in the end, the main advantages of the smartphone were high-quality cameras. On the back of the gadget there are two photomodules with optical stabilization and laser focusing (the first - 16 megapixels with aperture F1.8, the second - wide-angle 8 megapixels with aperture F2.4); on the front panel of the device, in addition to the 5.3-inch display with a resolution of 1440 by 2560 pixels, there is an 8 MP front camera with F2 aperture. The device is built on the basis of an eight-core Qualcomm Snapdragon 652 processor with a frequency of 1.8 GHz and an Adreno 510 graphics accelerator, the amount of RAM and internal memory is 3 and 32 GB (+ microSD up to 2 TB), respectively, and the capacity of the removable battery is 2800 mAh.

Price: 29990 rubles. Buy Sony Xperia X. This is a smartphone from the relatively recent X-series from Sony. Its strengths are its cool design, as well as the high quality of photo and video shooting. The Xperia X is equipped with a 5-inch Full HD screen, a six-core Snapdragon 650 processor, 3 GB of RAM, a 32 GB drive, a 2620 mAh battery and a fingerprint scanner, all packed in a thin all-metal case. As the world's largest manufacturer of cameras for mobile devices, Sony simply could not help but implement one of its best solutions in Xperia X, so the top 23-megapixel main and 13-megapixel front cameras are installed here. Of course, such an outstanding camera phone deserves detailed testing, which can be found on our website .