Visual Rhyme and Antirithm: Matt Stewart and Other In-Public Members 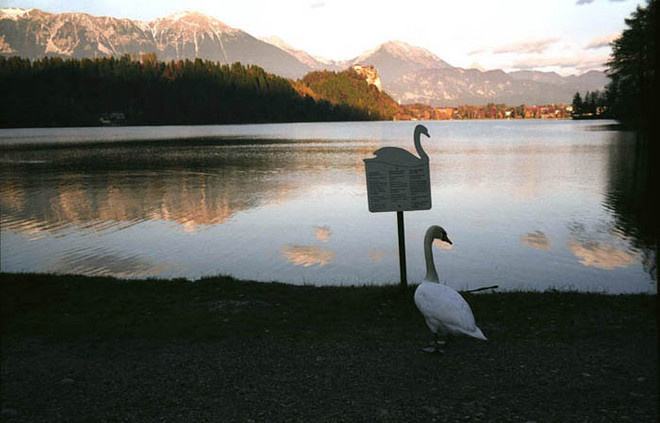 Two more examples of a simple, on the verge of banality, but not crossing this line, rhyme from Jess Marlow:
And here is an example of a really banal rhyme, well, such as blood-love or roses-frost: David Gibson included this shot in his portfolio, although I think this story was beaten before him. But to shoot it today, a hundred to five hundred thousandth time - you can, of course, but ... it’s better not to show it to anyone later. Several colors at once - also a simple rhyme (Niels Jorgensen): I will give two more (last) examples of a simple rhyme from Matt Stewart. It is not necessary to specifically explain that in one of them the rhyme arises due to synchronous gestures, and in the second because of the similarity of the punk crest to the crown of a tree: Another small step towards complication is the coincidence of the color and the complex shape or structure of the object. A pretty formal example from Paul Russell: and a completely magical (in my opinion) picture of Narelle Otio: Several colors, texture and ... something else, elusive (Melanie Einzig): Rhyming objects can be of different sizes, belong to different classes of objects and their similarity can be completely random (Matt Stewart): A classic example of strong rhyme is one of Matt Stewart’s most famous photographs: This photo became a photographic “icon” because it seems to everyone who probably sees it for the first time the same thought: “It’s obvious how I didn’t see it myself?” Well, albeit not to everyone, but many certainly come. Maciej Dakovich found a non-trivial visual rhyme: This rhyme would be simple if only a real cyclist on one side and painted people on a bicycle on the other were present in the picture . But the fact that the wheel of the painted bicycle, breaking off, exactly continues with the wheel of the motorcycle standing behind, makes it much more interesting. The following example, a photograph of Amani Willett, shows how to turn an absolutely worn cliche into something non-trivial. Probably everyone saw the pictures in which a person (usually a woman) covers his face with a newspaper (or a book, or a magazine), which shows the face. It is clear that it is very difficult for a person with a camera to get past such a plot. Nobody passes, and as a result there are a million of such photos. But here in the frame, besides the face from the newspaper, there is another face. It seems like only older. Secondly, it’s very good in color, next to the blue face from the newspaper is the blue chair, and next to the lively warm face is the red chair. And finally, the hand holding the newspaper, and the woman’s hand on the right, brought to her face - this is generally aerobatics: And the last example of a complex rhyme that I want to give again belongs to Matt Stewart. This photo contains several cross-rhyming objects: And finally, it is worth saying that in addition to visual rhyme, there is a technique, which is, in essence, its opposite. In English, this is called juxtaposition; in Russian, this, apparently, should be translated as "contrast." This is, indeed, a kind of "antirithm." In photographs using this technique, not similar things collide, but something that is either the opposite in meaning or acquiring some unexpected meaning in such a neighborhood that could not have arisen in itself. Here are examples from Otto Snoek and Maciej Dakovic: Featured Articles: Composition in the photo. Learning from the masters. Henri Cartier Bresson The rhythm in photography. Bruno barbie Learning composition from the masters. Eliott Erwitt - emphasis in photography