Canon EOS M50: a week with an expert 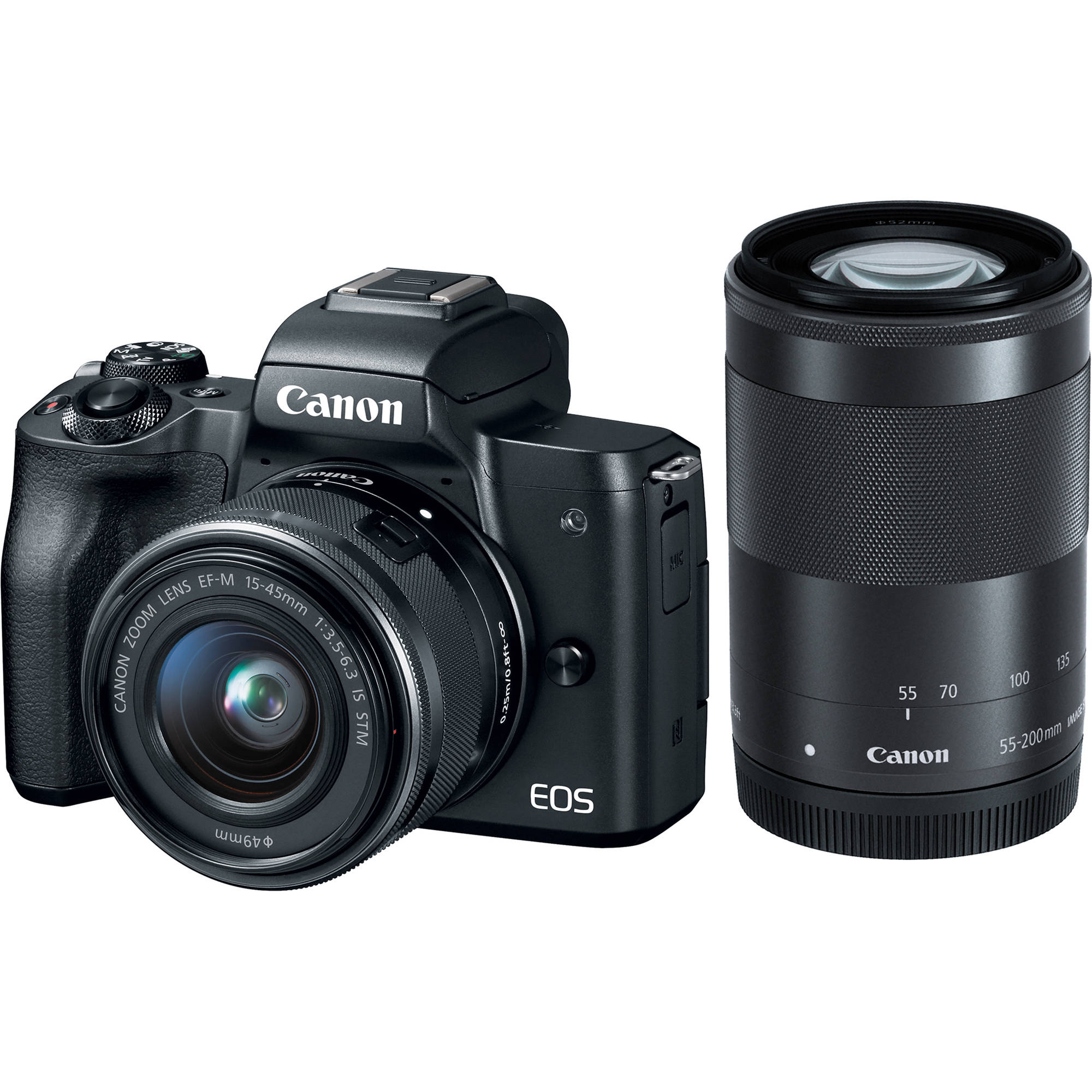 What is an advanced camera today? High-resolution full-frame sensor, ultra-high speed burst shooting, long battery life and used car price tag? Not always. A swivel screen with touch controls so familiar to us, 4K video recording, compactness, the ability to process images directly in the camera and transfer them via Wi-Fi to a printer, smartphone or tablet? But this - perhaps. We live in the age of technology, and it is they who determine the popularity of a product, and whether it will become a bestseller or go unnoticed in a series of their own kind. Get price Canon EOS M50 The Canon EOS M50 , which will be discussed in our big review, has everything you need to confidently be called a modern camera. It is compact and has a set of characteristics that will satisfy the wide needs of both a modern photographer and a video blogger. But let's talk about everything in order.

Canon EOS M50 is a logical continuation of the models of the M line with indices 5, 6 and 100. With the exception of the fact that the M50 is the first Canon mirrorless camera to record 4K video. Note that this is an entry-level camera, unlike the flagship M5. But this is not all that a new camera can stand out among its brothers and sisters. Here, perhaps, the aggregate rule works. The company's engineers tried to take all the best from previous models, to combine together, but so as not to make the camera too expensive and bulky. And they succeeded. If we talk about other key features of the Canon EOS M50, they are as follows: APS-C image sensor with a resolution of 24.1 megapixels, the new DIGIC 8 processor, Dual Pixel CMOS AF focusing technology, from 99 to 143 AF points, burst speed up to 10 frames / s, built-in electronic viewfinder, 3-inch touch screen with a rotary mechanism, processing RAW-images in the camera, Wi-Fi, NFC, Bluetooth, print images directly from the camera, weighs only 390 grams and a polycarbonate body. Not bad for an entry-level camera priced below $ 1,000, right? Let's dwell on the technical specifications in more detail and after that we will move on to design, ergonomics and control. In the end, we choose a camera according to its capabilities. The Canon EOS M50 has a CMOS-type image sensor with a resolution of 24.1 megapixels and a physical size of 22.3 x 14.9 mm - everyone already has the familiar APS-C format. It has an integrated dust cleaning system.
Canon EOS M50 / EF-M 18-150mm f / 3.5-6.3 IS STM Settings: ISO 100, F6.3, 1 s, 74.0 mm equiv.
Thanks to the new DIGIC 8 processor, the burst speed reaches 10 frames per second with constant focus and 7 frames per second with automatic for each frame. An impressive result, even for advanced cameras. The second, and, perhaps, the most important of the advantages of the new processor is support for video in 4K format. But there were some features, which we will discuss in detail in the corresponding section. To all this, the Canon EOS M50 implements the technology of Dual Pixel CMOS AF for autofocus, working on a phase principle. Each pixel of the image sensor consists of two separate LEDs, from which information on the recorded image is separately read, which allows to calculate the phase shifts.
Canon EOS M50 / EF-M 18-150mm f / 3.5-6.3 IS STM Settings: ISO 1000, F6.3, 1/200 s, 100.0 mm equiv.
The number of focus areas that cover 80% of the frame area has been increased to 99 (from 49 points in previous generation EOS M cameras). When using certain lenses, in particular EF-M 18-150mm f / 3.5-6.3 IS STM, EF-M 28mm f / 3.5 Macro IS STM and EF-M 55-200mm f / 4.5-6.3 IS STM, the number of autofocus areas increases to 143, and the coverage of the frame becomes 80% in width and 100% in height. Add here the ability to connect an external microphone to record high-quality sound during the preparation of vlogs, the ability to process images in the camera and send them directly from the camera to print or to a computer / smartphone / tablet directly during shooting and you will get a camera for the widest range of tasks of a modern photographer and videographer. The Canon EOS M50 shoots in both JPEG and RAW formats. It is the first time for EOS M cameras to use the new 14-bit RAW format - CR3. It includes a new algorithm for compressing RAW files - C-RAW, which replaces M-RAW and S-RAW, while the file resolution remains maximum, and its size is reduced by 30-40%. Canon EOS M50 is powered by a lithium-ion battery format LP-E12. It is always enough to shoot the claimed 235 frames (according to the passport) or more, with active shooting, it sits in 2-3 hours. If you put the camera in economy mode, you can win about an hour more or 150-200 frames. Unfortunately, charging the camera via USB is not provided. Included is a mains charger for the battery.

The Canon EOS M50 case is made of polycarbonate, which directly affects the low weight (390 g). The camera is also quite compact: 116.3x88.1x58.7 mm. With lenses such as the EF-M 15-45mm f / 3.5-6.3 IS STM or EF-M 22mm f / 2 STM, it can fit in your jacket pocket and stay in it all day, without much reminding yourself. Design is a subjective thing, but according to the editorial board of Prophotos.ru, the Canon EOS M50 looks bright and modern. The manufacturer offers the camera in two colors: traditional black and eye-catching, white with gray accents, which, you see, is not so common. We had a light sample on the test. Pay attention to how controls are organically integrated into the design. The camera, especially complete with silver versions of the lenses, should really appeal to fans of the well-known space saga. When continuing to inspect the camera, you pay attention to the built-in viewfinder and touch screen with a rotary mechanism. Once again, the Canon EOS M50 is an entry-level mirrorless camera, and these attributes can be attributed to the entry-level with a big stretch. Well thanks to Canon. The viewfinder is electronic, with a resolution of 2.36 megapixels. The picture in it looks vibrant and saturated. In addition to the directly photographed image, you can display all the necessary information: shutter speed, aperture, white balance, ISO, focus mode, continuous or single frame shooting, shooting mode, number of frames, grid, histogram, electronic level, etc. There is a diopter correction of the image, useful for people with not 100% vision. The corresponding regulator is located under the viewfinder itself on the camera body. It is comfortable to work with the viewfinder, it does not strobe and shows a live picture without noticeable delays. The liquid crystal screen with a diagonal of 3 inches - capacitive type, with a resolution of 1.04 megapixels, has a brightness adjustment with 7 gradations. The fact that it is touch-sensitive and with a rotary mechanism will allow you to shoot a variety of scenes, including selfies, while choosing a focus point by simply tapping the screen.
Canon EOS M50 / Canon EF-M 11-22mm f / 4-5.6 IS STM Settings: ISO 250, F4, 1/60 s, 11.0 mm equiv.
Separately, I note that the screen can be rotated facing the case and thereby protect it during carrying or transportation. A nice plus for the camera bonus box. The compartment for the battery and memory card is located below. Nearby is a threaded tripod socket. It is located exactly in the center of the bottom panel (on the optical axis of the lens), and when installing a tripod, access to the battery and memory card will be blocked.
The grip handle is comfortable for such a compact body. It is inherited from the Canon EOS M5. The camera fits comfortably in your hand, especially with lenses like the Canon EF-M 18-150mm f / 3.5-6.3 IS STM. Due to the size of such a lens, an additional grip appears and the stability of the camera in the hands increases. However, when shooting with lenses with built-in stabilization system, this is not so important.
There are not many controls on the case, but all the main ones are present and located where they should be. The shooting mode selection dial is combined with the trigger to turn the camera on and off. Nearby are a button for quick video recording and a programmable button M-Fn. The shutter button is framed by a control dial, which takes on various functions depending on the shooting mode, for example, choosing aperture value or shutter speed. On the right side of the case there is a Wi-Fi power button and a compartment with micro-USB and micro-HDMI connectors, covered with an elastic plug. Top in the middle are a hot shoe connector for connecting accessories and a built-in flash. The latter rises and falls manually. On the rear panel of the thumb protrusion, there are buttons for fixing the exposure and activating the function for selecting the focus point. When viewing them, they are used to scale images. Below is a navipad. Its central button provides access to a quick settings menu and confirmation of actions. The side zones of the framing ring are responsible for switching the focus mode AF / MF (automatic and manual), entering exposure compensation, controlling the built-in flash and deleting photos. Many buttons can be assigned other functions necessary for the photographer, for example: auto-correction of brightness, metering mode, choice of image style and many others.
Management requires some getting used to, because some useful functions with insufficient attention can openly interfere with shooting. In particular, this concerns the selection of the focus area on the screen: any accidental touch can shift it to an unpredictable place. Also, in a fairly intense shooting process, accidental touches of the control dial located under the shutter button are possible, which can lead to a change in shutter speed or aperture settings.

It's time to look at the main menu. For Canon camera owners, everything is familiar there. For the rest, I’ll say that the menu is well thought out and structured - everything related to photography is in one section, and that which relates to camera control settings is in another. The sections are divided into separate tabs, so scrolling through the screens is not required. Getting used to such a system is not difficult at all, and finding the right settings is easy.
The touch screen allows you to easily manage the settings in the same way as we are used to doing this on smartphones. All items and lines are clickable, everything can be changed with the touch of a finger. The response time is minimal, everything works very smoothly and quickly. But it is worth remembering that capacitive-type displays do not respond to touch with ordinary gloves, so in winter you will have to control the navigation buttons or purchase gloves for working with touch displays.
The Canon EOS M50 has fast menu. It is called up by the Q / SET button located in the center of the navigation pad. With it, you can configure the operation of all the necessary shooting parameters: the focus area, continuous or single shooting, white balance and much more. Having studied this menu, you can easily operate with all the settings and manage the filming process, like a pro. The touch screen is just as fast and accurate here. You can customize the menu for yourself by adding or removing certain parameters, changing their places by simply dragging the parameter icon. The Canon EOS M50 implements Auto-ISO mode, where a higher ISO value is set, for which automation will not be able to go beyond when selecting photosensitivity for the shooting conditions. Also, the EOS M50 has an automatic eye focus function, which is activated in tracking autofocus mode. But, unfortunately, this mode is not able to track the eyes of people in motion.